When I first saw the four Magic cards thing trending, I’ll admit I… guffaw’d. I’ve batted back and forth about what my four cards would be but never really seriously considered it. Then I saw that a person I actually know, and call a friend, tweeted such a four card post, and I decided I’d come up with my own. It was harder than I thought.

I think one of my biggest flaws is that I attribute too much value to value. To put it simply, my first instinct is too list the four most valuable cards that I own. But as I think about it, I realize that 1. my collection pales in comparison to those that are truly dedicated to collecting and 2. as my life has changed, the values of these cards, simple objects smaller and truly less valuable than a piece of green paper printed by the government, extends beyond market value.

From the featured image, you’ll know my four cards, but please, allow me to explain them all. 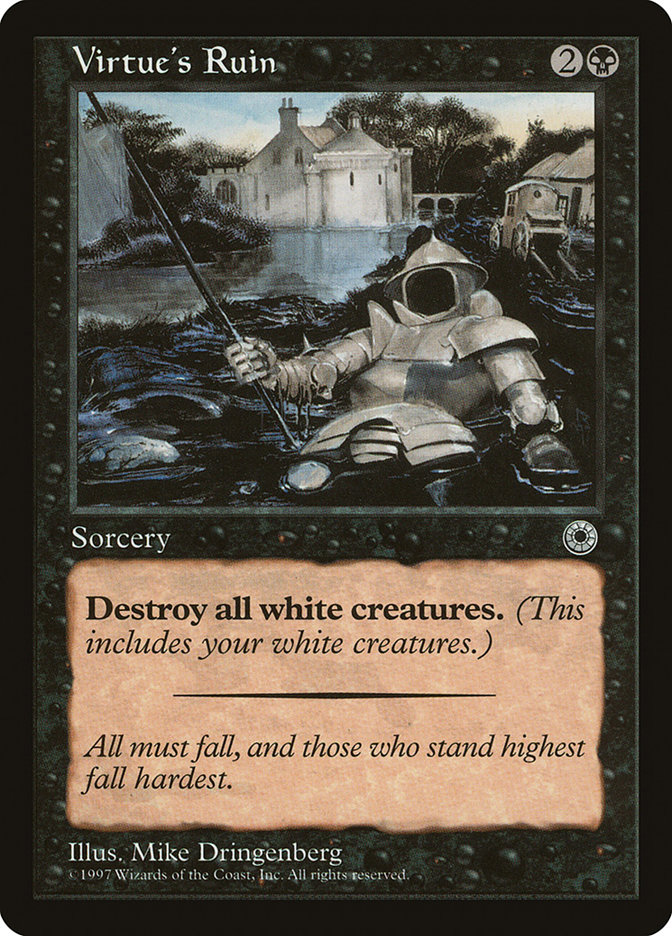 I don’t know for sure when it was that I was introduced to Magic. I lived in Plano, which places it between 1995 and 2000. And I specifically remember four cards. Those are, Virtue’s Ruin, the card that this bullet point is about, Skeletal Crocodile, a card that I further augmented with Endless Scream and Prodigal Sorcerer.

Let’s talk about what these cards mean to me. I grew up in a suburb. A new one, at that. I went to a private, Catholic school, and, while I’m talking about new things, a new one at that. (No, seriously. I went to kindergarten in a strip mall and the place looks like a small university today.)

I learned about Magic at Max’s house. Max has an interesting story, which maybe I’ll tell later, but honestly it’s fit for much higher journalism. Max was an only child, which was code for he had all the things we wanted. He had a, maybe thirteen inch, TV in his room. In those days it was pretty impressive if parents had a TV like that. He had a SEGA. He had one of those bunk beds where the bed is up top and there’s a desk below it, maybe with one of those new fangled Macs. Max had a DSL line when the year still started with a one, but that’s another story.

I don’t remember how or when I started to play Magic. But my first vivid memory is sitting in a circle, playing 3-4 player Magic on the crappy builder-installed carpet in Max’s bedroom.

So, the cards. I could write another five hundred words about how we were playing them wrong. I remember that Jason played a lot of Prodigal Sorcerers. And I remember that I played a deck that I thought was so powerful, so good that if I’d known that the pro tour was a thing, it could top those decks. It was black and white. This deck’s bomb (a term I wouldn’t hear for some years) was a Skeletal Crocodile with a Endless Scream on top of it.

The deck was white and black. Orzov as we’d call it now. Colors that, as I’d learned early in my in indoctrination into this magical gathering, were enemies. But I made them work. How? Quite simply! We had no judge. No L1, L0, or even “Rules Advisor” as their now called. We played the cards as we understood them. And we understood Virtue’s Ruin quite incorrectly. It says it destroys all White creatures. We, I feel quite naturally, thought that no wizard would cast a spell that would hurt himself. Therefore, no wizard would cast a spell that would destroy his or her own creatures.

Simply put, Virtue’s Ruin is an especially good card when it doesn’t kill your own creatures.

I can’t believe how much I’ve written about just this card. The next card will be in a new post soon.