Gather 'round children. Let me tell you a tale of way back yonder*.

You see, back in the days before "Miracle" meant anything more than, "an extraordinary event manifesting divine intervention in human affairs**," we had to earn our Counterbalance-Top wins. This was a day before Mentors. Before Miracles. Before the facists in Seattle took our Tops away***.

We called the decks "CounterTop [Something Here]." IE, the combination of Counterbalance and Sensei's Divining Top and whatever our win condition was.

*I Googled to make sure that yonder meant what I thought it did.
**Definition from Merriam-Webster
*** I do not actually believe that the good people working at Wizards are facists.

One of the great things about playing CounterTop was that it was never the auto-win that Miracles was. You still fought for your victories. You were never the best deck in the format. Rather than being one of many who were playing the best deck, you were that guy at your local game store who refused to let his opponent resolve spells.

So let me tell you about my deck.

I played CounterThopters. IE, the combos of Counterbalance + Sensei's Divining Top and Thopter Foundry + Sword of the Meek. But I played a very strange, very personal build. Rather than get deep into how bad my deck was, I'll list some cards that I played in the main, with some brief explanations:

People at my game store knew who I was. People specifically changed their decks to deal with me. I was that CounterTop guy. I was also that guy who has every card ever because my deck would frequently change by a few cards each week. They knew to expect anything and everything!

It's the first game of the second round. I'm playing against a Show and Tell deck. As this was pre-Miracles, it was also pre-Griselbrand. At that time, the deck frequently didn't play Sneak Attack. It was generally referred to as "Show and Tell Emrakul," because that was exactly its goal. Lacking a creature that functioned as a Yawgmoth's Bargain, it was particularly vulnerable to Karakas. To shore up that weakness, it often played some number of Progenitus. That's right, at one point, your GP promo Progenitus might have been worth playing as a more-than-one-of in Legacy. 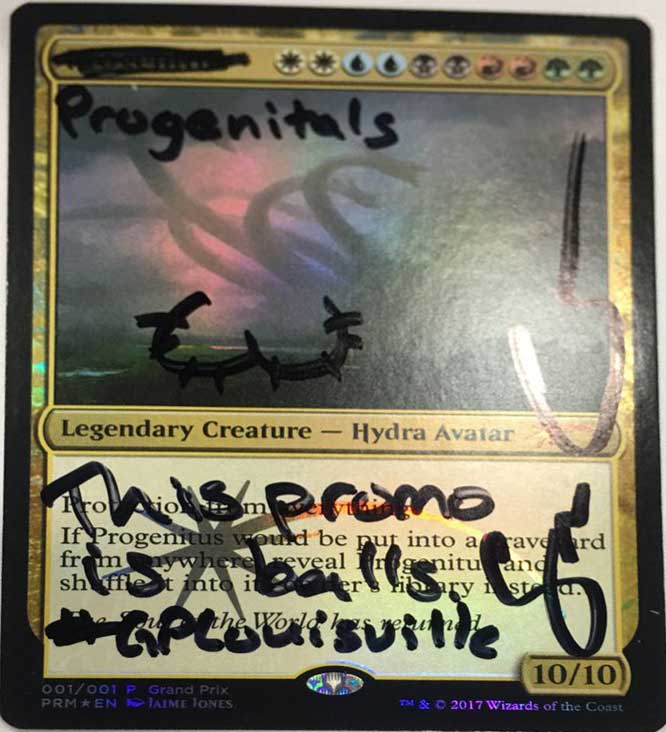 I don't remember the beginning of the game. Some number of turns in, I've got the CounterTop lock in play and I've been countering his every play. Finally, I pass the turn to him and he announces his play for the turn; a Show and Tell. 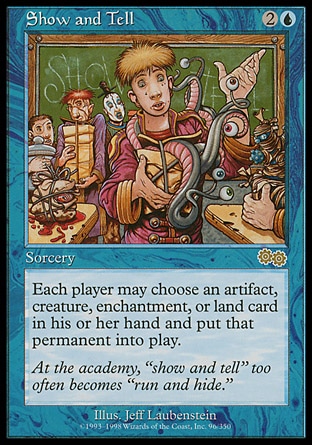 "Resolves," I say immediately, with mana open to spin top and knowing exactly what's on top of my library.

We both flip a card out of our hands. Predictably, he's got an Emrakul. I, however, flip over the god of all creature fuckers: Humility. 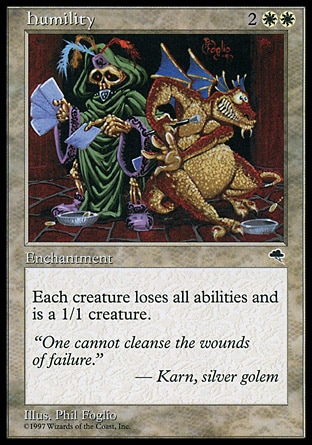 His hand shoots into the air. "JUDGE!"

The judge quickly makes his way to our table. My opponent explains that he believes that I've pre-boarded for him. What other explanation could there be? (It's worth pointing out here that there's no way to check for pre-boarding at regular REL)

"Nah man, that's in his maindeck," the judge explains with a chuckle.

"How could you know that!?" my opponent rebutts.

He scooped up his things and dropped. It was one of my greatest Magic victories.