It was Eternal Weekend 2016. I had gone 6-3, missing money by one round. In both events, I was playing a 75 that I was handed the day before.

It's late in the Legacy rounds. I'm X-2 and on track to money. I have several friends with the same record, so we meetup before the round to check pairings and share information about our opponents. Ben recognizes my opponent and tells me what he's playing. I immediately forget.

I draw my card for the turn and proceed to kill him.

I mulligan to four. This is not a great position to be in as a Tin-Fins player.

I draw my card for turn one. It's a Cabal Therapy and I've got the land to cast it. I play my land and announce my Cabal Therapy. 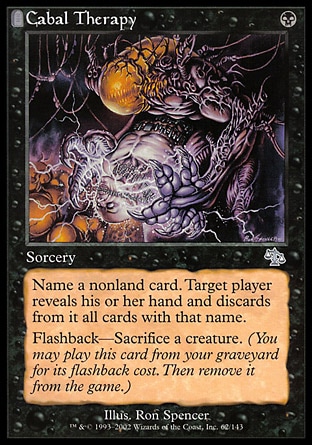 "I should definitely name Force of Will," I say.

After another few seconds, I announce, "I'll name Spell Pierce."

My opponent reveals a hand with 2 Spell Pierce, Volcanic Island, Show and Tell, and Sneak Attack.

"Hah!" I exclaim, "I should've kept a hand with Griselbrand!"

I pass the turn. My opponent draws for the turn and immediately shows what he's drawn. With no time for a reaction from me, he flicks out a Volcanic Island, Lotus Petal, Show and Tell, and his Sneak Attack.

"Wait," I say as he attempts to pass turn. I flick my cards a bit.

"I'll put in Griselbrand with your Show and Tell." 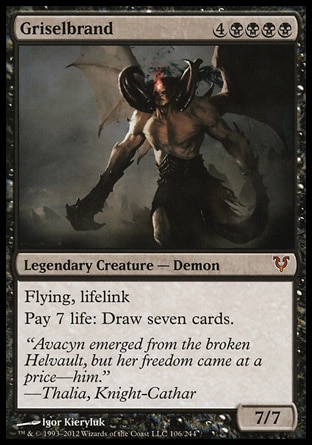 I draw my card for the turn, and announce that I'm activating Griselbrand. No response. I draw another seven. I announce a Dark Ritual. Again, no response. There's no indication that my opponent even recognizes that I've passed priority. I count to fifteen, then announce another Dark Ritual. Again, my opponent doesn't flinch. I count to ten and proceed. I begin playing as if he is "F6'd" (MTGO talk for passing priority until end of turn).

He dies on my second turn. This match has lasted a total of two full turn cycles. 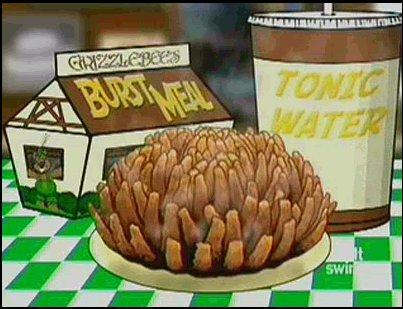 Koby comes by as we're deboarding and asks how the match went. I can tell that my opponent is pretty unhappy with the result, so rather than immediately tell the story of how my opponent gave me a Griselbrand and therefore the win, I tell Koby that I'll tell him as soon as I'm done boarding.

"Thanks for the games," my opponent says as he finishes packing up.

"Yea, good games," I respond reflexively. (As a sidenote, due to high salt levels, I've taken to not saying "Good games" after matches I've won unless my opponent says it first)

"Well they weren't good games," my opponent counters, with a hint of annoyance. He then walks away.

"Okay, now you definitely have to tell me what happened," Koby says excitedly.